“The Rat” by Nancy Coombs Mud doesn’t have much taste, does it? Eve bit tentatively into the half-eaten brioche she’d found under the park bench. It was soft and not that dirty. She stared, lying down, at the early morning sun hitting the Eiffel Tower while she ate the rest. Just then a cat dashed by, a rat in its mouth.

“Scram!” Eve heard, snapping her out of her reverie. She sat up straight as her heart pounded.

Two policemen kicked pea gravel at her shin. The pair of them were holding semi-automatic rifles, as police did in Paris. She should have left the Champ de Mars park before daylight but the yellow leaves falling to the ground had distracted her.

They thought she was mocking them, and one of the policemen spat in Eve’s direction but missed. They moved on, tenderly patting some donkeys across the way. Those donkeys – she hated the way their droppings dirtied up the place as they gave children rides. She resisted the urge to yell, “Scram!”

Eve checked her backpack, making sure her sketchpad hadn’t fallen out – she earned some money selling drawings. It was safe, as was her copy of Les Chants du Crépuscule by Victor Hugo. A battered copy, she’d found it discarded nearby, a good neighbourhood for garbage. She called Hugo, mon Père. He was her family, Eve’s art and books, her home. 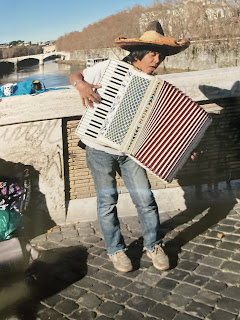 She knew the police might ask for some identification, which she didn’t have, so she sprinted down the gravel path then stopped, hearing something familiar. Soothing. A guy playing “La Vie en Rose” by Edith Piaf on the accordion. Had she seen him before?  His sombrero, his wrist full of beaded bracelets, and his shirt saying “Jean 3:16” all made her curious.

“Get lost!” the police yelled at him. She felt drawn to this stranger.

He stopped playing. Eve felt sad. She’d wanted to hear the rest of that song – the same one her late mother would sing to her. She’d like to know his story, too. Life on the streets wasn’t easy, but it wasn’t boring.

In comparison to many, her story seemed ordinary.  Eve had been born in Mauritius. When she was five, she’d moved to France with her mother who became a housekeeper for some French aristocrats. And her mother was killed. In this park. By a drunk with a knife.

How old am I?  Eve asked herself that sometimes, with no good answer.

Nineteen? Maybe. She had no papers. And no mother to remind her.

How long since she’d died – two years? Time meant little to Eve. She didn’t own a watch or phone and barely knew the date.

“Too bad, eh?” she whispered to the musician with a grin. Her smile was her best weapon, she thought.

The accordionist winked. His face was lined, but he didn’t seem that old. Thirty maybe? A five Euro bill sat on his case’s worn, red velvet lining. He’d put it there himself, she figured.

“Never forget. They’re not on our side,” he said.

The police or the French, she wondered. She noticed several overstuffed shopping bags beside him – what was in them?

He handed her the five Euros – though his sneakers were so worn she could see his toes.

She hesitated then grabbed it, stuffing it into her jeans’ front pocket.

“I’ll see you again, won’t I?” she said, and ran off. No sense taking a chance he’d change his mind.

She passed a guy on a bench. He looked stoned and French to her. Would the police chase him away, too? They’d turn the other way for one of their own, she imagined, as they had with her mother’s killer.

Still hungry, she remembered the Romanian restaurant on the rue St.-Dominique. The owner would leave leftovers outside on occasion. She walked over to it, happy to find a Styrofoam box.

Eve opened it, nibbling on some cold roasted potatoes and chicken so dry it stuck in her throat. A meal’s a meal, she reminded herself, then rushed towards the Fontaine de Mars. As she gulped the streaming water, she splashed some on her face then dried her hands on her jeans.

Finding food early in the day meant Eve could concentrate on more important things, like drawing. She’d only slept a little but wanted to be productive. Eve knew where to go – same as usual – Victor Hugo’s house. It was a long walk but she finally reached the Place des Vosges. She ambled across the grass to the entrance. It cost nothing and there, she too felt free.

The security guard knew her. Eve enjoyed flirting with him.

“Brigitte Bardot”, he called her. “When are you going to let me take you to the movies?”

He held the door for her and, inside, the staff greeted her warmly, too.

“How’s our little artiste?” Here, she was somebody, not homeless.

She headed upstairs. “Mon Père,” she called out to him. She had her rituals - bowing down before Hugo’s desk, sketching his bed, touching his pen. They let her.

Exhausted, she climbed onto the bed where Hugo had slept, had died. Under its dark wooden canopy, Eve felt protected, a feeling she’d missed since her mother died.

She had started to dream when she heard a lady in an American accent say, “Help! Someone’s sleeping in there.” The museum supervisor ran up the steps but, seeing Eve, did nothing.

Still, Eve was embarrassed. She got up and quietly said, “Au revoir,” having no idea how long she’d been in there.

She tiptoed down the steps to the exit.

“Ciao, Jean-Paul,” Eve said to the guard as she walked out the door.

“Stay longer next time,” he said, adding, “Why are you always in such a rush?  Got a family at home waiting for you?”

Eve walked quickly away – home and family were what she wanted most of all.

She composed herself then spent the rest of the day dozing and drawing on the square. Sunset approached and with it her worst enemy – the cold. Fall was setting in fast.

She liked to be on her own, but Eve knew there was warmth, and safety, in numbers. She was losing the will to be alone. And she was hungry again.

Wait, the five Euros! Eve could get a hot drink – maybe two if she went to the burger joint – and with luck find some fries left on a tray.

Where had she put it? She cried, thinking she’d lost the money.

The front pocket – she remembered, pulling it out fast. She noticed some writing in red marker on it.

“Pont Neuf, 21h” it said. The oldest bridge in Paris – what did this mean?

It had started raining, and she walked briskly across the city’s wet cobblestones to see. Food could wait.

As she approached the bridge, she heard an accordion playing “La Marseillaise” and some voices singing. She followed the sound.

Down below, she saw a row of people lying close together. Eve felt their eyes sizing her up and almost left. But then she spotted a shadowy outline, near the streetlamp under the bridge, of a man wearing a large hat. It was him – the accordionist!

She watched as he pulled a blanket out of his bag and placed it on the elderly man closest to the wall, a privileged spot, protected from the wind. It existed sometimes – the civility of the street

He yanked out another blanket, handing it over two small children and their mother.

“Véronique. From Mali,” the woman said to Eve

Another woman was making a bonfire. “Frédérique,” she said. “Happy you’re here.”

The man with the hat walked over and extended his hand. “Paul.”

“I came from Vietnam many years ago,” Paul said. “I buy blankets and food to hand out with the money I make playing accordion for the tourists. When I got my papers, I vowed I’d help. ‘For He so Loved the World’ I call my little charity. Are you joining us?”

“Oui,” Eve said timidly. “And where do you sleep?”

Paul laughed. “I’m not undocumented anymore, but that doesn’t mean I’m not homeless.”

His bag was no longer full – he pulled out the last blanket and handed it to Eve as he grabbed yet another bag.

Eve watched as Paul kicked away the rat traps on the far end under the bridge and reached inside the bag. She saw him pull out a sack and tear it open: it said, “Rat Feed”.

He dropped it where the traps had been. Before he reached his spot on the ground in the huddled mass, hundrds of rats swarmed the sack.

“Paris has declared war on the rats. I help them, too,” Paul said.

Eve wasn’t sure if Paul were crazy or a saint. One rat wandered off in his direction to a little bowl he’d left for it.

“Ah, Liberté, Egalité, Fraternité, I have been waiting for you,” Paul said.

Eve softly recited Hugo’s poem, Song of Love: “A something sweet and blest – a dream of which heaven is the pole; a dream mingles soul and soul…”

Paul smiled.  Eve slept well that night, amongst her new family. The rats bothered her not at all. 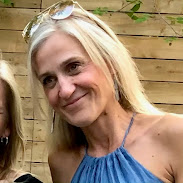 Nancy Coombs is a former trade attaché and currently flutist, a writer and an arts advocate. She enjoys spending time with her family and running along the banks of Lake Ontario in Oakville, where she lives.