That night, I sat on the padded mat, knees drawn up to my chest, my arms wrapped around my shins, feet bare, heels down, toes pointing upward, so badly battered and bruised, I couldn’t even touch them. In the glare of my lamp, I could see that the nails of both my big toes had started to turn black. I didn’t have anything to ease the pain, so I just swayed back and forth, hoping to rock the pain away.

The night before, I had trouble falling asleep. Knowing I had to be awake, dressed and ready to go by 10:30 that night, made it impossible to relax enough for sleep to come. I couldn’t turn off my mind, couldn’t stop thinking. And I was cold! So cold I wore my clothes to bed: thermal underwear top and bottom, wool socks, turtleneck, even the fleece liner of my coat.

So the “being dressed and ready to go part” wasn’t a problem, but the falling asleep part certainly was. I lay as still as I could. I slowed my breathing, kept my eyes open and stared into the darkness, hoping my eyes would tire and that would bring sleep. But even that didn’t work. I needed to relax. I had already climbed the wall once today. Once is enough!

If I did sleep, it was fitful and so I was up and dressed by 10:30. I pushed my way out of my polar sleeping bag like a moth from a cocoon. Lying on my back I slid my snow pants up over my thermal leggings. Rolling onto my knees, I pulled the outer shell of my Columbia men’s size “M” jacket over the fleece liner.

Boots on and laced up. Buff scrunched around my neck; hat, mitts, poles and head lamp at the ready, I unzipped the tent and crawled out into the pitch black of night, the darkness lit only by stars. So many stars!

I made my way to the dining tent where hot tea and a snack was set out on the portable table. Six of my companions were already there and soon the rest joined us. Our guides, Dickson, Vallee and Rama hurried us along. “I know you’re tired after climbing the “Wall” today.” Dickson said, his Swahili accent calming. “You did a great job! But if we want to make the summit by sunrise, we need to begin before midnight.”

The “Wall” was just that. A rock face that seemed to rise almost straight up, though there was a trail. Sort of! We moved in single file, climbing over large, jagged boulders, both poles poking up from my pack as I used my hands to pull myself up onto the next rock.  And now, after a long, physically demanding day and no sleep, we headed out once again.

Midnight, the end of day four, the beginning of day five. Pole, pole, (pronounced “polee”) Dickson reminded us once again. Slowly, slowly. And for good reason. At about 2:00 a.m. we made our way passed another group at about 4,800 meters, our headlamps revealing young men sprawled on the rocks, sick and exhausted. Athletic types who tried to conquer the mountain with speed.

At around 3:00 a.m. we stopped in a rock clearing to have an energy bar, drink water, catch our breath. I stood atop a flat rock, head resting on my hands, leaning on my poles. A moment later my body jerked awake as I felt myself beginning to fall. I caught myself and then my headlamp caught the faces of some of my companions, Bill, Sonia, Beth, my daughter Violet, my son-in-love Perrin, the others. All of us visibly tired. Dickson rallied us once again and we continued up the rock slope.

Sometime around 4:30 a.m., off in the distance, a thread of light broke across the horizon revealing a cloud bank between us and the first light of dawn. We were literally walking above the clouds. The sun had begun to rise, but we weren’t anywhere near the summit yet. 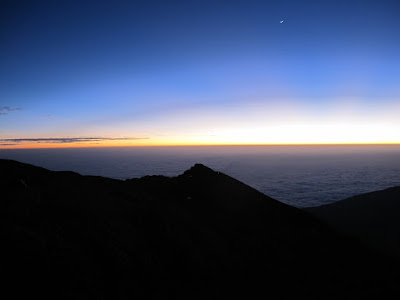 When the sun broke, we were standing close to a glacier, greatly shrunken from the days when an hallucinating Ernest Hemmingway wrote about the “Snows of Kilimanjaro”.  And we still had another thousand meters left to climb.

The rock that bore us, that had been so solid beneath our feet, suddenly gave way to scree and at the same time the ascent became even steeper. Pole, pole.  As I am wont to do every once in a while, I began to pray. “Please God, let a lion come out and eat me so that I have a good excuse not to finish the climb.”  Alas, there are no lions on Kilimanjaro, no life of any kind up that high.

Our group began to separate, some gone ahead of us and others trailed behind. Violet, Perrin, Sarah, Dickson, Vallee and I sat under the ridge at Stella Point to rest a moment, a thermos of hot tea passed between us, shivering as a loud, cold wind howled. One hundred and sixty-five meters more to climb and I really wasn’t sure if I could make it. Pole, pole.

As we began the final ascent to the summit, another glacier rose off to my left and to my right Bill and Sonia literally skipped down the slope, smiling at us, encouraging us. “You’re almost there”, they said. “Just a few more minutes!”

Those are the same words Dickson or Vallee or Rama would say every single day as we yearned for that day’s climb to end. “We’re almost there, just around that ridge, just another half hour.” But it never was.

And then quite suddenly, as the bright morning sun poured down on us, we stood in front of a handmade wooden sign that read:

There is more to my tale of climbing up, more to the story of my mountain top experience. But those stories don’t involve my toes. That was in the going down.

When I first purchased my extra sturdy mountain climbing boots at MEC (Mountain Equipment Co-Op), the young man who helped me as I tried them on never told me they were specially engineered and that all the grommets and hooks and laces and strap thingies had a purpose.  He never told me that I should pull the boot laces extra tight at the ankle when descending the mountain as that would hold my foot tight and prevent it from sliding into the toe of the boot, stop my toes from being smashed.

The slope of the descent going down Mt. Kilimanjaro was as steep as it was going up and even though I used my poles and my cross-country skiing techniques to protect my knees, keep me from falling in the scree, I didn’t know to tighten up on my boot laces to protect my toes.

After four hours of unrelenting descent, I felt the first twinges of pain. We stopped for a short rest and a quick lunch and then we set out for Mweke Camp where our porters would set up our tents one last time. My boots too heavy to lift, my toes too sore to walk, I soon dropped behind my other companions. Dickson and Rama stayed with the group, Vallie stayed with me.

As afternoon dusked into evening, we had descended over 2,000 meters. The temperature rose significantly, and the landscape changed dramatically. The rocky trail wound through dense plants and trees that stretched out around us. As darkness enveloped us, our headlamps revealed shapes in the shadows and at one point, I could make out a Buddhist meditation garden dotted with small statues, though the only thing I meditated on at that moment was the throbbing pain of my toes.

Vallee was patient and encouraging. I had been hobbling for hours, trying desperately not to stumble on the rocks or knock over the Buddhist statues, which I later discovered, didn’t actually exist. Nor did the meditation garden. Dumb shadows! Long after dark, Vallee led me into camp, the night sky alive with stars, the dining tent lit by lanterns and laughter. Cheers from my companions greeted me as I walked into the tent, though I have to admit I was feeling a little embarrassed. But I wasn’t the last to arrive. Rama and Victoria weren’t there yet.

That night, I sat in the dark on the padded mat in my tent, my headlamp illuminating my feet and I could see that the nails of both my big toes had started to turn black. I didn’t have anything to ease the pain and so I just swayed back and forth, hoping to rock the pain away. It did not.

The next day I walked backwards much of the five hours through the sultry cloud forest, grateful when we arrived at the base of the mountain. There our bus waited to take us back to Moshi and a few days later, I was on to the next adventure. Eventually the nails of my big toes fell off but have since grown back again. A small price to pay for the experience of a lifetime. 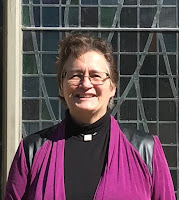 Debra P. McGill is an ordained minister in the United Church of Canada, and for the last 2 ½ years has served at St. Stephen’s on-the-Hill United Church in Mississauga. Debra has two daughters, two sons-in-love and three grandsons. Earlier in her ministry she said “yes” to an opportunity to live and work in Botswana for nine months (unpaid but amazing) and has never been able to shake the dust of Africa from her boots. Saying yes to many other opportunities has enriched her life in so many ways and led to lots of adventures.