“Antisemites I have known” by Brian Henry

I’m not terribly sensitive about antisemitism, some might say not sensitive enough. The day we moved into our new house in Toronto, our elderly Italian-Canadian neighbour, Mark, introduced himself. Leaning over the fence, he confided the last people to own our house weren’t nice. Having dealt with them, I couldn’t disagree. “Jews,” Mark explained.

Ah. My wife and I exchanged glances, more embarrassed for our neighbour than concerned. This struck me as old-fashioned prejudice, the kind of tribalism that led previous generations to ascribe personal shortcomings to membership in a different ethnic group: Italian, Jewish, Polish – whatever – the kind of prejudice mostly forgotten these days and that doubtless made Mark's children and grandchildren roll their eyes. And Mark turned out to be no problem, not a friend, but fine as a neighbour.

Another time, a colleague, having had too much to drink after work, started going on about a street he’d been on with all these mansions, “full of rich Jews.”

His words seethed with resentment, as if these “rich Jews” were responsible for everything bad that had ever happened – to him, to everyone,  to the world. I recalled a headline from Der Sturmer: “The Jews our are misfortune.”

“You know I’m Jewish,” I reminded him.

“Oh, I didn’t mean you!” Which just added a personal insult – as if I’d want special status.

The historian Yehuda Bauer observes that animosity towards Jews takes many different forms, yet we have only one name for all of them: “anti-Semitism.” The term itself is antisemitic, coined in 1879 by Wilhelm Marr to give a scientific colouring to his hatred. There is no such thing as “Semitism,” no evil ideology that Jews subscribe to, no evil propensity that Jews gravitate toward. And there’s no such thing as “Semites” – it simply means “Jews.”

In this way it makes sense my co-worker could forget I was Jewish. The Jews of his imagination had no relation to any person. His “Jews” were just an empty vessel to fill with his ideas of what was wrong with the world. And having invented a villain, he enjoyed the pleasure of self-righteous outrage at their expense.

Another time, I wore a kippah to a party. I’m not Orthodox – normally I cover my head only when a blessing’s being said – but on this evening, I was coming from some occasion where a kippah was called for and decided to keep mine on. As a provocation. At the time, decades ago, my friends all leaned left. I was myself a card-carrying member of the NDP and an executive of my local riding association. But I had not been getting a good vibe from my fellow lefties.

I’d barely time to open a beer at the party before a woman approached me, a complete stranger, and demanded to know if I was a Zionist. This stuck me as a bizarre question, like demanding to know whether I was a suffragette. Weren’t some questions already answered? Didn’t women already have the vote? Didn’t Israel already exist? What can such a question mean other than, Should Israel to continue to exist?

She said, “Then you’re a Nazi.” And having bravely confronted me in my kippah and imaginary jackboots, she fled back to her friends.

It was a shock. Also, a clarifying moment. After the Holocaust, antisemites on the far right, invented Holocaust denial, which isn’t really about denying what happened, but more about denying that Jews can ever be victims. The true villains of the “Holocaust” says the far right are the Jews. The Jews invented this monstrous lie of the “Holocaust” to further their evil plots.

Similarly, left-wing antisemites position Jews, not as the victims of the Nazis, but as their successors.

Antisemites on the left don’t object to sympathy for Jews now safely dead, killed by the Nazis, (i.e., people on the far right, not the left), way back during WW2, but actual Jews – Jews alive today – are under suspicion. And Jews who want to be in good-standing among leftist friends, sooner or later, will be asked to denounce Israel.

Not that all leftist are antisemites – the leader of Canada’s Green Party declares her support for Israel. But the further left of centre you move, the more pervasive loathing for “Zionists” becomes. 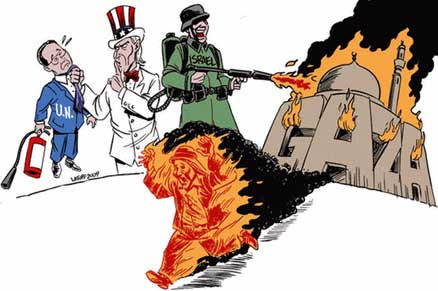 For the left has merely updated old-fashioned antisemitism. For the antisemitic left, “Zionists” and “Israel” are empty vessels into which they pour their ideas of everything wrong with the world. Israel, they say, is a racist, colonial, imperialist, apartheid, genocidal, Nazi entity. It’s evil personified.

The real Israel is a liberal democracy like Canada or the UK, flawed to be sure as are all states, but it has no relation at all to the antisemite’s imaginary Israel, which is a land of Jews in jackboots.

The conclusion, which the antisemitic left draws, is that Israel should be wiped off the map. What else do you do with such an evil place?

What’s to happen to the 6.9 million Jews who live there? The antisemitic left would deny they’re making a case for genocide. And it’s true that few of them are going to start killing Jews themselves. I think mostly what they want is the pleasure of self-righteous outrage, plus the bonus of feeling heroic as they fantasize themselves engaged in a great battle between Good and Evil.

These groups make no secret of their desire to kill Jews, and they act as proxies for Iran, a state on its way to making nuclear bombs and that’s often proclaimed its desire to wipe Israel off the map.

All Islamist terror groups, and Islamist states like Iran, share virulent Jew-hatred as part of their core ideology. The Hamas Covenant (Hamas’s constitution), declares Hamas’s purpose is to “obliterate” Israel. And further that: “The Day of Judgment will not come about until Moslems fight Jews and kill them. Then, the Jews will hide behind rocks and trees, and the rocks and trees will cry out: 'O Moslem, there is a Jew hiding behind me, come and kill him.’” (Read the entire Hamas Covenant here or highlights here).

During the war Hamas recently launched against Israel, we saw protesters throughout Europe and North America marching in support of Hamas. Preferred rallying cries included: “Israel will fall” and “From the (Jordan) River to the (Mediterranean) Sea, Palestine will be free” (in Toronto for example).

And what of those 6.9 million Jews in Israel – and Jews anywhere, for that matter?

I’m not terribly sensitive about antisemitism, but the past few weeks worry me. Compared to most places in the world, Canada has been a paradise of tolerance, but it's eroding. In regards to antisemitism, what worries me most is the eerie silence. We’ve suffered a deluge of antisemtism. Have most people even heard about this? I don’t think so.

Nor has the Jewish community heard many words of support. Where are all the supposed anti-racists, the people ready to decry the slightest micro-aggression?  They’re not tweeting their solidarity; they’re more likely to be marching alongside the pro-Hamas supporters chanting about massacring Jews.

Brian Henry is a writer, editor, creative writing instructor, and publisher of the Quick Brown Fox blog. He’s written opinion pieces for the National Post and the Toronto Star and was a regular contributor to the (now defunct) Jewish Tribune and in the UK for Harry’s Place and for Engage, the anti-racist campaign against antisemitism. This piece was previously published on TheJ.ca.