“The Shadow of the Wind” by Carlos Ruiz Zafon, reviewed by Ted Wolfe 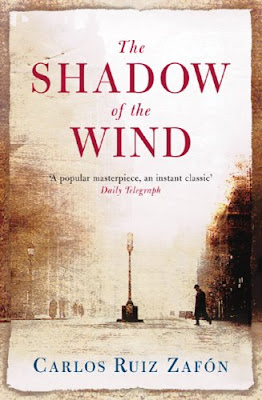 Set in post-war Barcelona and steeped in fog and rain, in desolate and macabre incidents, The Shadow of the Wind is a book lover’s treat. It’s a book about a book. The narrator is a young boy, Daniel Sempere, who is still mourning the loss of his mother. His father, a dealer of used and rare books seeks to lift the pall of sadness that pervades both their lives by taking him to the Cemetery of Forgotten Books.

His father tells him, “When a library disappears, or a bookshop closes down, when a book is consigned to oblivion, those of us who know this place, its guardians, make sure it gets here.” In the Cemetery, “books that are lost in time live forever….Every book you see here has been somebody’s best friend.”

His father asks him to chose a book and make it his own. Daniel finds The Shadow of the Wind by Julian Carax.

When he reads the book Daniel is filled with delight and wonder. He tries to find out more about Carax and whether he wrote other books. Daniel’s father has never heard of Carax. They ask other book dealers. One of the dealers offers Daniel a lot of money for his book and won’t say why he wants it so badly. Daniel refuses to sell it.

As years pass, Daniel hears tales about Carax and the books he wrote. A strange looking individual is seeking out copies of Carax’s books wherever he can find them. And when he finds them he burns them. Who would go out of their way to burn these books – and for what reason? The answer is worth waiting for.

In Shadow of the Wind, Carlos Ruiz Zafon has written a book reminiscent of Love in the Time of Cholera by Gabriel Garcia Marquez. It is a multi-layered love story that unfolds over a long period.

Much remains hidden about Julian Carax. No one seems to know if he is alive or dead. Zafon gives the reader subtle hints and speculations along the way finally presenting the background information about Julian Carax as he was and is through a posthumous letter to Daniel from a relatively minor character who has been murdered.

This a rich and complex novel out of which flows the pain and joy of being in love in different times and contexts. He creates characters beautifully and honestly. Fermin Romero De Torres is an over-the-top but believable character and a source of humour and pathos in the book. Within the first few pages readers will be drawn into the mystery, the shadows, the speculation and the pursuit that pulls them down the twisting Calles and Avenidas of The Shadow of the Wind.

Read it first for enjoyment and read it again to see how Zafon does it.

Note: If you know of a good book, let us know about it.  Send your book review to brianhenry@sympatico.ca

For information about Brian Henry's writing workshops and creative writing classes, see here.
Posted by Brian Henry at 7:05 AM