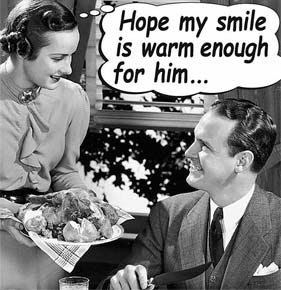 6:00 a.m.
I awaken first, tiptoeing down the staircase to my all stainless steel kitchen, making sure that I don’t awaken my husband. I start his coffee, let the cat out, and set the table for breakfast. It’s now spring, so of course, we use the apple green place mats, with white plates rimmed in apple green. Juice glasses on the right corner of the place mat. Linen napkins under the forks on the left.

I return upstairs and turn the shower on for my husband Brent, and while he is slowly awakening, I brush my teeth and comb my honey blonde hair. As he showers, I make the bed and lay out his suit.

I return downstairs, fry him a couple of eggs with bacon, lightly buttered toast and a glass of freshly squeezed orange juice. Brent descends the stairs, and as he sits at his place at the table, I pour his coffee for him.

“Don’t hold dinner for me,” he states. “I may be a little late tonight. The guys are thinking about going to the club to play a round of golf. I’ll get dinner with them after the game.”

“Of course, did you need me to put an extra pair of slacks and a golf shirt on a hanger to take with you?” I demurred.

“Yes, that would be great. What have you got planned today?”

“Not too much. I’ll drop the kids off at their camps, go to Pilates, and maybe go to the spa with the girls. I have some reading to do for my book club. I would like to talk to you about going back to work, you know, even part time. Just to earn my own money. What do you think?”

Brent put down his cup and stared at me from across the table.

“Ashley, I thought we’ve talked about this. I’m the breadwinner, and you take care of the house. I make enough to support us. What more do you want? I think you just need to focus on the house and the kids.”

Brent nodded his approval. I was being the perfect Oakville wife. Just keep myself occupied, but make sure that the family ran smoothly. Don’t upset the natural order of things.

Brent gave me his perfunctory kiss on the cheek. I let Nina, my housekeeper and nanny clean up the breakfast dishes, and then she set the table for the kids’ breakfast. There was no point in their getting up and disturbing their father’s morning routine before he went off to his job, where he was a senior partner in a law firm downtown. He liked to be in his office nice and early to get a head start on his day when ever he could.

I went upstairs, woke my children, Madison, 10 and Mitchell 12. Maddie was in soccer camp and Mitchell was in hockey camp for the summer. Mitch loved his hockey camp, always so excited to let me know how his skills were improving and how they were playing this team or that team. He was small for his age, but he made up in speed what he lacked in weight. He was growing up so quickly and when he smiled, well he looked just like his father.

I was dressed in my Lululemon pink tracksuit, and my Louis Vuitton purse secured on my shoulder. The kids piled into my Lexus SUV, and I dropped them at their respective camps. They were so excited to see their friends, and they gave me a quick wave goodbye as they scampered off for their day’s adventures.

My phone rang. I could see on my Iphone that it was my best friend Michelle.

“Come to Starbucks. I need a latte in the worst way,” she said

I drove over to our favorite Starbucks. I saw Mich with another friend of ours, Tanya. I waved, and they indicated that they had already gotten my latte for me. We all hugged and then we sat in the comfortable chairs.

“We have a scheduling problem,” Mich said.

“I was supposed to take the new guy tonight, but I have to be a John’s parents place. I was hoping one of you could do it.”

Tanya shook her head. “Can’t. I have a cocktail party at Peter’s work.”

I shrugged. “It’s not a big deal. Brent’s going to play golf; I can take it, just so long as I can be home by eight.”

“I asked Brent if I could go back to work, but he said no.”

Mich sniffed. “Yeah, ever since Lori got divorced and her ex got himself a nice young thing, I guess it’s passed through our minds that we need to put some money away. That’s why this little thing we have going is so great. We do our thing and we still have time to take care of the kids. And really, you would miss our little coffee klatches.”

Tanya smiled and pointed one perfectly French tipped nail at me. “Let’s face it; you wouldn’t have as much fun as this.”

I nodded and laughed. They were so right. This job was so much more fun.

I ran to do my errands, and instructed Nina to pick up the kids and give them dinner. Then I drove over to the mall and parked my car in the far lot. I picked up a small nondescript Japanese car and drove over to an industrial complex.

We took no chances in our little community. God forbid should someone see one of our cars and ask the question, “So, what were you doing out in that area of town?”

I opened the door, one that was like every other door in the complex. The only distinguishing mark was the number plate, a buzzer, and a speaker. Above the door was a camera, but this was hidden and only the occupants of the building were aware that it was there.

Once inside, there was a change room and another door with a buzzer. Once the patron was ready, he would push the button and was granted entry.

I went in and went to a separate change room in the back. There, I removed my Lululemon tracksuit and put on black fishnet tights. A tight vinyl corset fit snuggly around my waist with leather hi cut shorts. I finished my ensemble with stiletto boots that boasted a 2-inch platform and a four-inch heel. I removed all my jewelry and put on a fitted mask that covered my hair and face. I could see out, but no one, not even my own mother could have recognized me it this get up.

I went out into the dungeon and checked out all our equipment. Whips, chains, flogging posts, St Andrew’s crosses, and a Catherine’s wheel. Over on the other side, a medical room, and in another corner, a schoolroom. Yes, we had it all, for all the discriminating tastes.

The buzzer rang, and I went to the camera to see what the patron looked like. I couldn’t see his face, but there was something oddly familiar about him. I buzzed to let him in.

The second buzzer rang and I released the door and let him in. The room was dim and it was difficult to see him.

“Welcome to Mistress Venom’s house of Pain. How would you like to be humiliated today?”

A voice that was so familiar to me spoke in a timid fashion. I knew the voice, but not the tone.

My husband Brent stood there, head down; hands folded in front of him, a frightened child awaiting punishment.

It took everything I had to conceal my shock. Is this what he did when he told me he was going out with the boys? Had he been here before? No, of course not, the girls would have said something. Well, he was going to get the works today, and not on the house. No, baby, if it was humiliation he wanted, well, we were here to please.

I walked around him, stopped to run my crop down his naked back. He shivered and started to raise his head. I cracked my crop across his ass, raising an angry welt. Let him try and explain that to me.

“Slaves shouldn’t talk. Now get down and lick my boot.”

He dropped down and wrapped his hands around my ankle and started to lick the tip of my boot. A minute later, I flicked my boot to shove him away. Another crack with my crop raised another deep welt across his back. He was still kneeling in front of me, waiting for instructions.

I love my job. This was going to be fun. Crack! 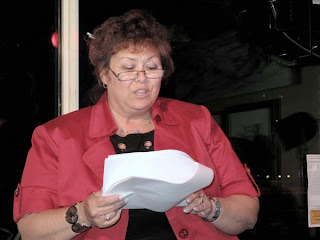 Fran MacKenzie Peackock has been writing for over 35 years, but most of those years have spent scribbling absent notices for her kids and permission slips. More recently, now that the kids are grown, she is attempting to write real fiction or, as her friends tell her, the stories with the twists. But then, isn't life about the twists? On June 17, she gave a reading of "The Perfect Wife" at CJ's Cafe in Bronte.  Read another of Fran's stories here and a short memoir here.