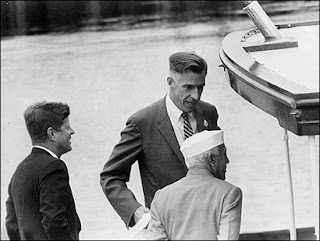 The Friends of Dutton-Dunwich sponsor this annual short story writing contest in honour of Dunwich’s most famous son, John Kenneth Galbraith. The contest is open to any Canadian author.

The winners are announced and celebrated at a gala ceremony, which also honours the noted economist, statesman and author John Kenneth Galbraith. It’s a grand evening of readings, music, good friends and refreshments. This great time is open to the authors and the public at no charge.

Photo: Galbraith with President Kennedy and Prime Minister Nehru of India.  In 1962, Galbraith was the American ambassador to India and an advisor to the president.  Three years before sending the first American troops to Vietnam, Kennedy acted on Galbraith's advice and attempted to negotiate peace in Vietnam using Nehru as an intermediary (from the Boston Globe). But before all that, before leaving southwestern Ontario for Harvard and international acclaim, Galbraith learned his his licks writing a weekly column for the Dunwich Chronicle.