The Idea of Perfection by Kate Grenville, reviewed by Annette Walker 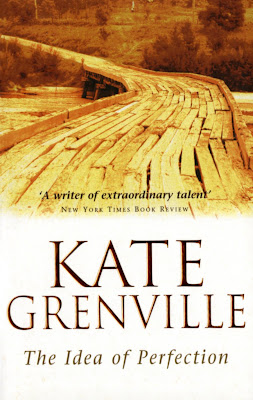 This story takes place in a very small Australian town of Karakarook, New South Wales, population 1,374. The characters are developed subtley and masterfully by the author as little by little, their quirkiness and uniqueness emerges. You feel as if you know them from the inside out.

For example, Douglas Cheeseman, the engineer, arrives in town to inspect the state of a highway bridge. He is tall, thin and gawky with crooked teeth and prominent ears. His ex-wife told him not to talk about concrete as it bores people, but he thinks of concrete as a thing of beauty, its properties quite underestimated and understated by people.

The main female character is a rather large-proportioned unusual woman called Harley, who is coming to terms with her husband’s suicide and thinks that somehow she is a dangerous woman.

There is a parallel between the bent bridge that Douglas is sent to demolish and replace but which is actually strong and the characters of Douglas and Harley, who look far from perfect yet ultimately prove perfect for each other. The author quotes Leonardo da Vinci, who described an arch as "two weaknesses which together make a strength.”

This imperfect characters of the central romance are contrasted with the character of Felicity, who thinks kisses are “probably wrinkle-forming” and thinks, “pottery had seemed promising, but the clay ruined your hands.”

To maintain her perfect skin, Felicity relies on her face cream called “Crème Jeunesse,” not smiling too much, and obsessively keeping out of the sun.

The Idea of Perfection is a contemporary comedy of manners – quirky and spirited, a remarkable novel from a truly amazing writer.

Annette Walker lives in Mississauga, Ontario, with her husband, three grown sons sometimes away at University and an elderly grey and white cat called ‘Savvy’. She grew up in England and Canberra, Australia and just returned from a trip to see relatives, travelling through small country towns like Karakarook, the background of Kate Grenville’s book.

For information about Brian Henry's writing workshops and creative writing courses, see here.
Posted by Brian Henry at 11:25 AM