"A Neat Round Hole," a true story by David Chesterton 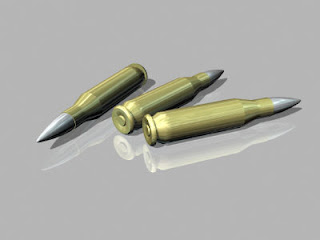 "I don’t like this,” Bob said, staring apprehensively at the three bullets in John’s hand.
“Oh don’t be a sissy!” He held one of them under Bob’s nose. “Look at it. It’s only a .22 from Dad’s target rifle. It’ll go off like a damp squib.”
“No it won’t! It will explode in the fire!”
That shows how much you know. It’ll heat up and expand, and when it ignites the whole thing will be melting.”
I stared at the hot embers in the fire grate. I didn’t say anything. John would only bully me too. But I figured that I’d stand well back and to one side when he threw the bullets into the fire.
“It’s not right for you to steal things from Dad’s den,” Bob protested, trying another tack.

“These were under the Chesterfield with lots of dust and stuff,” John sneered. “Dad didn’t even

know they were there.”

But Mom will hear the explosions,” I said. I wasn’t actually supporting Bob. I just didn’t want her to be frightened. At the same time I could see the fire place was wide enough to spread the bullets over a large area of the room.

“Look out there,” John said, pointing to the window. “She’s talking to Uncle Ted, over the fence, right down at the bottom of the garden.

I opened my mouth, but before I could say anything he yelled, “I’ve heard enough of your scaredy-cat whining,” and he threw the bullets into the centre of the red-hot coals But he then stepped to one side, right up against the fire-place chimney wall.

Bob dived down behind Dad’s armchair and I moved over to the stair well, as far back as I could go.

The first one went off with a loud bang, but the second one was a muffled echo of the first.

The third one interrupted him, exploding with a frightening crack, and we heard a similar, but sharper sound from the glass front of the book shelf. John tripped over the fire curb, as he sprang back, landing in a sprawled heap.

I stood quietly waiting, not sure if that was it. But when I looked around at the others, Bob was on his knees in front of the glass pane. “What will you tell Dad about that?” He was pointing with a trembling finger at a neat little hole in the glass.

I went over and couldn’t believe what I saw. “Why didn’t it shatter the glass? That would have been easier to explain.”

John, now sure his brave experiment was complete, looked down at us and argued, “It’s right at the bottom. He won’t see it.”

I pointed to Volume 5, of the World Geography books, which had an equally neat round hole in it’s spine. “He’ll see that the next time he wants to tell us something about Africa.”

John looked a bit scared and said, “I have to tell Colin about this,” and ran out.

‘He’s eleven.’ I thought. ‘If I were the oldest, I’d stay. He always runs away when his stupid ideas go wrong.’ But I grabbed Bob’s arm and said, “Let’s get out of here before Mom comes back in. She’ll see it for sure.”

For information about Brian Henry's writing workshops and creative writing courses, see here.
Posted by Brian Henry at 7:31 AM