"How I learned the true meaning of Karma," a travel story by Roy J. Adams 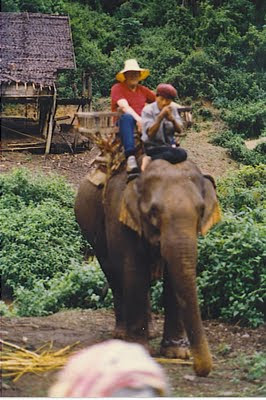 When I caught the plane to Chang Mai in Thailand, I was hoping for an interesting cultural experience. I returned with much more. To my complete surprise, I had a profound revelation – one that continues to reverberate through my life to this day.

My central purpose was to get to know and experience the life of the hill tribes that lived on the border with Burma. They continued to follow many of their ancient traditions and learning about cultural diversity was one of my great pleasures.

There were several tour companies that ran standard trips but I wanted something different, more real, more gritty. After a few days of plodding from shop to shop I met Jack. He was a Karenni tribesman and experienced tour guide who was developing a new and different plan. It would go further off the track into parts of the jungle that do not see many tourists. I signed on immediately but I was the only one.

“Come back tomorrow,” Jack said. “Maybe enough people will have registered to make the trip a go.”

The next day I was still the only one signed up. I asked how much it would cost if we went alone. It would set me back about as much as a weekend trip in Ontario. I said: “Let’s do it.”

The day before we were scheduled to leave I had breakfast with two nurses on leave from the battle zone near the Cambodian border.

“So where are you off to?” one asked.

“To a little visited part of the jungle – and on an elephant,” I said breezily.

"You must be very brave,” she said. “the newspapers are always publishing stories about tourists being attacked and sometimes kidnapped in the jungle.”

Although I kept a smile on my face trying to appear nonplussed, a tingle of fear went down my spine. But, I was not about to cave now. I had been thinking about this adventure for a long time.

On the appointed day, Jack and I flew off to a smaller town near the Burmese border where we met the elephant owner and began our trek. The first night we spent at a village on top of a hill where we slept in the hut of the headman and his several wives and servants. The sleeping bag with which Jack provided me was designed for a much smaller person. It only came up to my waist. The day had been rainy and I had no dry clothes. I shivered most of the night as a cold wind blew through the cracks in the hut. 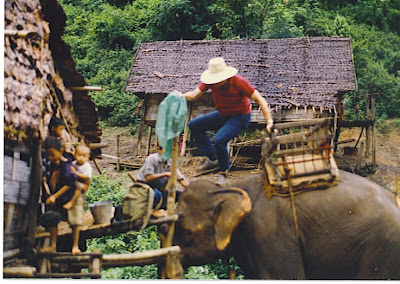 The next day I had the sniffles and a temperature of about 102. Oh well, no turning back now.

We went through several villages where the people dressed in their traditional garb and head coverings were going about their daily chores of getting a living.

After stopping for a lunch of Thai shrimp soup, curry and sticky rice for desert we started up a creek bed that was a shortcut to the village where we were to spend the night. The creek had only a trickle of water but at points the only way forward was over some sizable boulders. The elephant’s way of dealing with the obstacle was to put his foot on a boulder and then launch his full bulk up over it leaving me hanging on in a near panic, coughing and sniffling and getting sore from the uncomfortable wooden saddle.

About an hour after lunch, Jack stopped our forward progress. “I think,” he said, “that I left my wallet back at the lunch place. You and the driver can continue on but I gotta go back for it.”

And with that said he was off. I stared aghast at his back as he quickly ambled down the creek bed leaving me alone on an elephant with a guy who knew no English.

When the full implications of the dire straight that I was in hit me I thought “I gotta get out of here. I gotta get back to civilization. The woods are full of danger. Bad guys might be waiting around the next bend to beat me up and take all that I have or even worse to carry me off to who knows where.” I had all sorts of questions but there was nobody to answer them. The jungle was full not only of human dangers but also of very nasty critters such as poisonous snakes and huge spiders. Not far back we had passed a spider’s web that was six feet across. What must be the size of the thing that made it?

And then it hit me; I was helpless. There was not a bloody thing that I could do except hold tight to the wooden saddle and hope that the driver was an honest person who would deliver me as promised to the village where I was expected. I also had to trust that Jack would come back and get me and hopefully with some aspirin to treat my fever.

This, I thought, is the true meaning of karma – fate. We westerners like to think that we are always in control but it is an illusion. There are forces out there that are beyond us and, it was beginning to become clear to me, when we meet them our best strategy is to flow with them. Just let it happen. Don’t fight it. Be serene.

When that revelation enveloped me, I relaxed – a smile forming on my face. Hell, I was in the middle of a “great adventure.” My best strategy was simply to enjoy it to the fullest. I felt liberated. I felt exhilarated. I wanted to shout “Bring it on. This is the good stuff. If I get out of here, this will be a treasure of memory that will be mine for the rest of my life.” I was no longer afraid. I was excited. I was very pleased.

My guide turned out to be an honourable man. He got me to the village where they provided me with a bucket of water and a rag to dip in it and wrap around my head to combat the fever. Jack did return with his wallet and with a few aspirin to boot. The next day the sun came out and I felt great.

Now, whenever I get into a tight spot my blood pressure does not soar as high. Instead of frantically seeking solutions to unsolvable problems, I go with the flow. Things usually work out. But even when they don’t, I almost always come away with another good story. Whatever happens, I win. 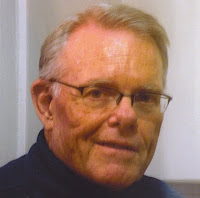 Roy Adams’ first ambition was to become a creative writer. However, after compiling a stack of rejection slips, he found that he was better at acing tests than he was at impressing magazine editors. As a result he acquired a Ph.D. in industrial relations, took a job at McMaster University, and eventually became an expert on labour rights as human rights. He published his share of scholarly literature, a form of writing for sure, but not one commonly classified as creative.

After taking early retirement in 1997 Roy moved closer to his initial ambition when the Hamilton Spectator invited him to write an column. He also contributed articles to the Globe and Mail, the Toronto Star, the Halifax Herald and periodicals such as Canadian Dimension, Our Times and Straight Goods. His hitch-hiking memoir entitled "Josh the Witch" was included in the anthology No Such Thing as a Free Ride (Goose Lane, 2008) and his first published poem will soon appear in CCPA Monitor.