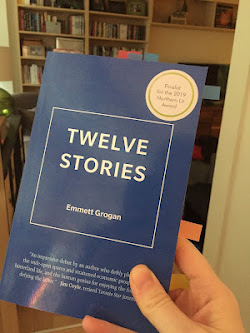 Would it be possible for my novel Twelve Stories  to get a mention on the Quick Brown Fox website?

Twelve Stories celebrated its third anniversary on October 13, 2021. In the last three years, the novel has gone back to press six times. There are now 1,600 copies in print, with over 1,400 sold through BMV Books in downtown Toronto: I encourage people who haven't read it yet to pick up the novel from the BMV Superstore located at 471 Bloor Street West (see here).

The novel was a Finalist for the Northern Ontario Literary Award, and Nominated for the Stephen Leacock Medal for Humour. For the second year in a row, Twelve Stories was featured on the Scotiabank Giller Prize website in 2021 (see here) – I'm aiming for the hat-trick in 2022!

The sixth printing has a new chapter "The Lost Weekend" that wasn't included in the first five printings of the novel, to keep the project fresh. Over time, I have posted all fifteen chapters of the novel (with photos illustrating each chapter) to my  website (here).

It would be wonderful if you could share my project with your readers. I have worked very hard to make Twelve Stories into a legitimate success story in the field of Canadian literature. (Look at that great quote from Terry Fallis on the cover of the novel!)

Hope this note finds you well,