“Darkness at the Stroke of Noon” by Dennis Richard Murphy, reviewed by Bob Young 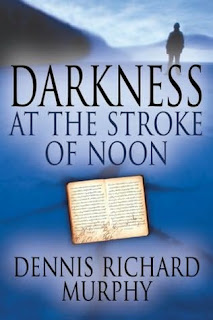 ﻿Many Canuks (including yours truly) loathe winter’s darkness, but this novel thrives on it. In this genre-bending tale, the almost twenty-four-hour darkness of a remote Arctic island becomes a character in itself, affecting the plot and creating a stark yet enchanting mood.

Darkness at the Stroke of Noon is suspenseful crime fiction, but it’s also Murphy’s musing on several themes: imperial Britain’s hubris, current Canada-US relations, the geopolitics of global warming, and the beauty and harshness of the far north.
﻿﻿﻿﻿﻿﻿

Beyond the story’s themes, it’s hard to pigeonhole this book into a single sub-genre of crime fiction. By my count, Murphy mixes together four of them.
First, as a cozy, the plot’s catalyst is a sort of village murder, but the “village” is an isolated archaeological dig site, peopled by a small group of scientists, students, and support staff. Second, as a classic puzzle mystery, the novel has enough suspects, possible motives, and confusing details to satisfy fans of the play-fair detective story.

﻿﻿Third, fans of suspense will revel in the multiple and shadowy threats to Booker Kennison, an RCMP sergeant and the main protagonist. Fourth, the story is a thriller in that the archaeological dig’s findings may result in Canada losing ownership of the Northwest Passage and in the Inuit losing their reputation as a peaceful people.


Structurally, Murphy took a risk by interweaving the real-time action with events from the Franklin Expedition of the 1840s. (That doomed sea excursion was a British attempt to find the Northwest Passage through the Arctic.) In gory detail, these long-ago events play out in the diary of a Franklin-Expedition crew member.﻿﻿﻿
﻿

﻿﻿The narrative voice of the British nineteenth-century diary is pitch-perfect, and the journal’s contents are key to the overall plot. They’re also suspenseful, horrifying, and tragic. In fact, Murphy’s handling of the journal device—with its harrowing first-person telling of a crew member’s initial idealism, disillusionment, and ultimate despair—elevates this novel above the average mainstream mystery.
﻿﻿﻿﻿﻿﻿﻿﻿﻿﻿﻿﻿﻿﻿﻿﻿﻿If there are weaknesses, I found that the motive and behaviour of the murderer and the accomplice sometimes strained credibility. Perhaps deeper characterization of them would have helped. Also, the denouement bordered on sentimentality in the character’s thoughts and the dialogue. But any blemishes don’t diminish Murphy’s accomplishment in telling a fresh, complex, and politically relevant story of Canadian crime. ﻿﻿

﻿﻿﻿﻿Will you be seeing sergeant Booker Kennison again, in a series? Unfortunately not, because Dennis Richard Murphy died in 2008, shortly after finishing the manuscript for this novel. Murphy had a successful career in film and television as a writer, director, and producer of documentaries; he also taught in the field. It’s a shame that his promise as a novelist and the potential for a Booker Kennison series weren’t fully realized before his untimely death.﻿﻿ 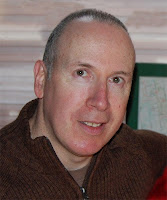 Bob Young is an emerging writer who is interested in crime novels and how they can be about more than just “who/why/how done it.” Bob has lived in Toronto and Vancouver, and currently calls Guelph, Ontario, his home. He lives with his wife and a mischievous tabby cat.
For information about Brian Henry's writing workshops and creative writing courses, see here.

*Note to writers: Unfortunately, HarperCollins only accepts agented material. It does not accept unsolicited submissions or query letters.
Posted by Brian Henry at 7:56 AM